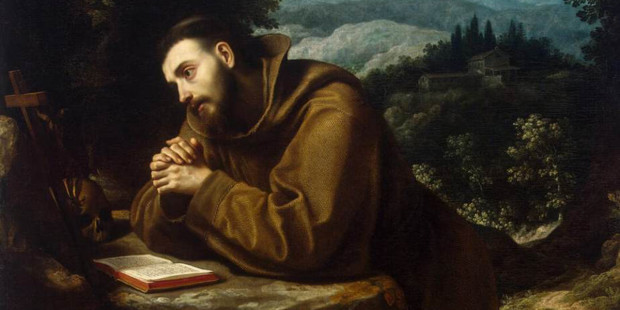 From Wikipedia, the free encyclopedia

Jump to navigation Jump to search

This article is about the friar and patron saint. For other uses, see Francis of Assisi (disambiguation).

Side View of St Francis of Assisi at Saint Thomas Aquinas Cathedral in Reno NV USA on the feast day of Saint Francis in Oct 2017. The Cathedral has been run by the Conventual Franciscans: Order of the Friars, Minor. (OFM Conv. )

Saint Francis of Assisi (Italian: San Francesco d’Assisi, Latin: Sanctus Franciscus Assisiensis), born Giovanni di Pietro di Bernardone, informally named as Francesco (1181/1182 – 3 October 1226),[2] was an Italian Catholic friar, deacon and preacher. He founded the men’s Order of Friars Minor, the women’s Order of Saint Clare, the Third Order of Saint Francis and the Custody of the Holy Land. Francis is one of the most venerated religious figures in history.[3]

Pope Gregory IX canonized Francis on 16 July 1228. Along with Saint Catherine of Siena, he was designated Patron saint of Italy. He later became associated with patronage of animals and the natural environment, and it became customary for Catholic and Anglican churches to hold ceremonies blessing animals on his feast day of 4 October. He is often remembered as the patron saint of animals. In 1219, he went to Egypt in an attempt to convert the Sultan to put an end to the conflict of the Crusades.[6] By this point, the Franciscan Order had grown to such an extent that its primitive organizational structure was no longer sufficient. He returned to Italy to organize the Order. Once his community was authorized by the Pope, he withdrew increasingly from external affairs. Francis is also known for his love of the Eucharist.[7] In 1223, Francis arranged for the first Christmas live nativity scene.[8][9][2] According to Christian tradition, in 1224 he received the stigmata during the apparition of Seraphic angels in a religious ecstasy,[10] which would make him the first person in Christian tradition to bear the wounds of Christ’s Passion.[11] He died during the evening hours of 3 October 1226, while listening to a reading he had requested of Psalm 142 (141).